From Mr. Zuercher
The boys participated in the Push-Ups for Charity event this morning, and competed against other schools in the School division. They went head to head against Woodbridge and Northwood high schools, as well as a team from Plaza Vista. They ended up winning the competition, completing the most push-ups combined of any school team. They won the school competition trophy, which will be displayed proudly in the trophy case. The school will keep the trophy for one year, and will have a chance to defend their title next year.

Along with the team, Andrea Balbas and three of her geometry students also came out and participated in the event. Complete domination ensued.

Big props go to Craig L, who did an amazing 80 push-ups in 90 seconds, which I believe is the most done by any student I’ve had in the 3 years we’ve been participating.

So far the team has raised $1,438 and we are hoping to reach our goal of $3,000 once we collect from everyone who pledged to donate per push-up. 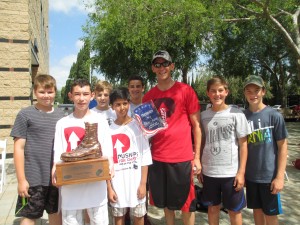